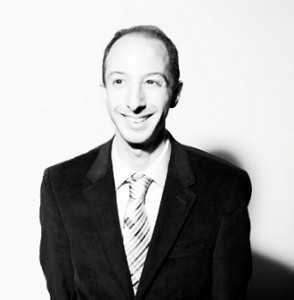 Ben Blacker is a professional television writer and the producer and moderator of the Nerdist Writers Panel, an informal chat about writing, TV, and the process and business of writing TV.

With his writing partner, Ben is currently a staff writer for Dreamworks’ animated series Puss in Boots, coming to Neflix in late 2014. The duo also write for Marvel’s comic book series Thunderbolts; they have written for CW’s Supernatural (as staff writers) and Nickelodeon’s Supah Ninjas; and they have developed original pilots for Fox, USA (twice), Spike, Paramount, Nickelodeon, and other entities. They are the creators and writers of the Thrilling Adventure Hour, a staged show in the style of old-time radio, which is also a podcast on the Nerdist network.

Q: The Thrilling Adventure Hour requires you to be incredibly prolific—one brand new show, every month. How do you do it?

It’s perhaps obvious to say but writers have to write. Otherwise, you’re just calling yourself a writer instead of living as one. We’re lucky enough to have figured out a way by which to get our writing to the masses, but we’d be writing every day even if we didn’t have a monthly deadline. Because it is creative and, like any creative endeavor, has developed a sort of mystique surrounding it, people (even writers) don’t think of writing as a job. But it is. We don’t clock in and out, but if we’re not running around to meetings, we’re spending most of every day writing. Writing is also a craft, and if you don’t practice your craft, then you lose the ability to do it. Your technique becomes creaky. Constant use makes for a well-oiled metaphor.
Q: How does working on the Thrilling Adventure Hour compare to being part of the writing staff for a successful TV show, like Supernatural?
There were some aspects of writing and producing our own show for many years before getting staffed on someone else’s that made the transition easier than it might have otherwise. In writing TAH, as well as the many pilots we’ve written for various networks over the years, we learned how to break story on our own. Many new writers underestimate how important plot and structure can be, concentrating instead on jokes, characters, etc. But strong structure is the foundation for any good story. So, writing twelve TAH episodes (with three stories in each episode) and various other projects every year trained us to break story quickly and, we think, with some degree of skill. That was really valuable on Supernatural where structure and formula are important.

With TAH, because we created it and are its only writers and producers, we’re making the show that we most want to see. We’ve never had as creatively satisfying an experience. We are limited only by the show’s format of live theater/podcast, which is barely a limitation at all. We are, in fact, freer to tell the sort of stories that interest and excite us than we’d be working on a show with a huge budget because the visual elements exist only within the listeners’ imaginations. Add to that the tremendously fun group of collaborators we’ve collected over the years, the warm, passionate fans we’ve amassed, the thrill of live theater, and the fact that we still enjoy working together, and clearly TAH is untouchable as far as a satisfying creative enterprise.

That said, working on a TV show is a lot of fun. Working on someone else’s TV show—particularly when you have a strong showrunner—is a chance to play with someone else’s toys, tell the kinds of stories that don’t necessarily fit into any other universe, make the kinds of jokes that we don’t make in TAH, as well as have the often underrated opportunity of being a good employee. It’s satisfying doing a good job serving the boss. Plus, on Supernatural, Supah Ninjas, and some of the other shows we’ve worked on, we’ve met some funny, adept writers who’ve taught us a lot.

Making television, film, theater or any sort of creative writing is a collaboration. It’s the way these things work, and it’s the way that makes the most sense. And it’s also really fun! Whether it’s a dozen writers in a room cracking a sitcom or plotting a crime drama or it’s the relationship we have with Marc Evan Jackson (who plays Sparks Nevada in TAH) or the director of our show or TV episodes, other people have other skills, opinions, and perspectives, all of which—hopefully—help to bring your initial vision to the stage or screen. We get more out of collaboration—at first with each other, valuable training for the later steps—than we would writing in a vacuum. The only time a script is “pure” is when you hit “save” that last time and it lives on your laptop. Only, a script can’t live on your laptop. That’s not its purpose. A script that isn’t out in the world isn’t anything at all. So a writer has to be prepared to collaborate—and hopefully your collaborators will be as brilliant, funny, and skillful as ours have been—if he or she wants to succeed. That’s why we love the idea of writing workshops. It’s an opportunity to collaborate in a safe environment.

Q: What are some tools or ways of looking at a scene for new writers trying to do a comedy punch-up?
Q: What are the most important elements in a gripping dramatic story arc?

Both of these questions have the same answer: character. What is the unique way in which your character sees the world? How does that make his or her action or reaction funny? How does it drive plot?

One of the best, distilled pieces of advice we’ve gotten about writing in any medium came from comics legend Len Wein, who created Wolverine, Swamp Thing, and about 200 more comic book characters. Len said he approaches every character—whether it’s the super-dumb Hulk or the super-intelligent Mr. Fantastic—by asking what that character’s goal is. Achieving that goal goes at the end of the story. The beats of the story are putting obstacles in the character’s way. The more the character is beaten down, the more important that goal becomes to him, and the more the reader sympathizes with the character’s plight. Comedy or drama come from the ways in which your character responds to those obstacles and what he does when he achieves his goal.