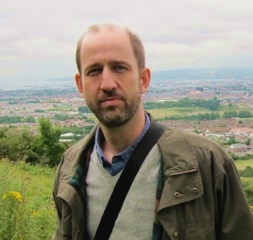 Nicholas Griffin received a BA from the UCLA School of Film & Television.  He co-wrote (with his brother, Ted) the film Matchstick Men (2003), directed by Ridley Scott, starring Nicolas Cage, Sam Rockwell, and Alison Lohman. Roger Ebert gave the film four out of four stars and wrote, “The screenplay for Matchstick Men is an achievement of Oscar calibre – so absorbing that whenever it cuts away from ‘the plot,’ there is another, better plot to cut to.”

Nicholas also wrote for the F/X drama, Terriers, one of Time Magazine‘s 10 Best TV Series of 2010. Nicholas has worked for most of the major studios, including Paramount, Dreamworks, Warner Bros., and 20th Century Fox, and with Robert Zemeckis, Ivan Reitman, Tom Cruise, and Shawn Ryan, among others.

Nicholas has taught both screenwriting and directing candidates in UCLA’s graduate program; he has also taught a master class in screenwriting for the annual Playwrights Festival at Ball State University. He was awarded the 2010-11 Hunter/Zakin Chair in Screenwriting at UCLA, where he continues to teach graduate classes in screenwriting.

Any statement about “what’s important” in writing is likely to be both true and false; it really depends on what’s important to you. Lacking tenacity, you’ll probably succumb before you reach your destination. Lacking patience, you’ll be miserable while you’re getting there. Then again, you might get lucky. Or unlucky. All that matters is that you show up at the page.

Q: Why is a good structure so important to a script?

Imagine you are walking into a mansion. Get permission, if convenient. Admire the deep gloss of the hardwood floors, the high boxwood ceilings, the stone fireplace in the parlor, the late-period Matisse on the wall of the library. There’s no need to dig any deeper than that; these ornaments, the reassuring evidence of good taste, are all you’re supposed to see. But something else is going on. What’s underfoot: foundation, load-bearing walls, bridging joists, even plumbing: it’s the stuff that gives the palace its shape, and it’s the stuff you never see. It’s what we call structure. It’s the reason you’re standing in a house.

In movies, too, you never see structure, if it’s done well. All an audience sees is story, characters in desperate pursuit of a dream. As screenwriters, however, we know that structure is the heat shield that keeps our story from burning up on re-entry. If you’re not convinced, knock out a wall of that mansion and see what happens. The roof caves in, the walls crumble, your characters die under the rubble with their witty lines still on their lips. We’ve mixed up our metaphors, but the fact remains: structure saves lives.

Nick: Screenwriting is optimistic work performed by pessimistic people. The great opportunity of a writing workshop is the chance to immerse yourself in the world of your story (and in the stories of others) in the same way you immerse yourself in a great movie. Writers actually work quite well together, we tend to be supportive of each other, and we have one distinct advantage over any of the other crafts – directors, actors, editors – in that we are self sufficient. Actors need other actors; directors can’t direct traffic. We can do our work independently, whether we’re first timers or old hands, and it’s the same work Shakespeare, Beckett, Stoppard, Wilder, Towne, and Tarantino did. True, they’re better than we are. A workshop is a place where, hopefully, we start to close the distance.

No writing is ever wasted; it can either be used, or it leads to something which can be used. Bad ideas lead to good ideas. The most dangerous place for any creative idea is inside your head. The brain does terrible things to a good idea. It betrays, abuses, criticizes, ignores, coddles. Get it down on paper. It’s safer there.