Students will live and work in the walled hill town of Orvieto, which sits on a spectacular butte of volcanic rock that rises nearly 1,000 feet from the valley floor. In addition to its location, Orvieto is famous for its gorgeous gothic Duomo, Saint Patrick’s Well, Etruscan underground city, and wines. In the long summer evenings, the daytrippers disperse, and you’ll have enchanting medieval streets almost to yourself.

Long before the ancient Romans conquered central Italy, Orvieto was one of the twelve federated cities of the Etruscan league. During medieval times Orvieto acquired wealth as an independent comune, and in the Renaissance, control passed to the Popes, many of whom used Orvieto as an official residence.

You’ll be staying in the Istituto San Lodovico, a convent with its own grounds on the town’s southwestern wall. The Istituto hosts several creative seminars and workshops every year. The Istituto San Lodovico is managed by the Sisters of Compagnia di Maria, of Our Lady Of Santa Giovanna di Lestonnac, a religious order founded in 1607 by Saint Joanne of Lestonac. The main purpose of the order was to educate women, and it did so in Orvieto for many generations, beginning in 1834. The school closed in 1998 but the sisters still run the preschool and offer year-round hospitality and lodging to guests.

The history of the convent itself is difficult to reconstruct due to the loss of historical records. The convent already existed in 1300, but the building’s origins date to the 3rd or 4th century BC—under the grounds of the convent are Etruscan wells and caves excavated in the rock. From 1300 to 1800 the convent was occupied by different religious orders until it passed to the Sisters. The grounds of the convent today are fairly modern by Italian standards, with the entrance hall probably built around 1800. The annex to the convent is the Church of San Lodovico, dating back to 1350 and restored in 1746.

Read the Chicago Tribune article about Istituto San Lodovico: “In Italy, a Room for the Soul” (Note: The rates quoted in the above article are very out of date.)

Single rooms are available, or two students may request to share a room, which are all en suite. For couples, the single beds in the double rooms can be made up as a double bed. See REGISTRATION for rates.

The Istituto provides a continental breakfast every day, and offers complimentary wireless internet, although you may find service is more reliable in the local cafes. Students will be on their own for other meals, except for a welcome dinner, though our groups often choose to eat together. 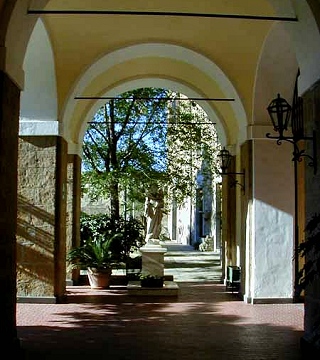 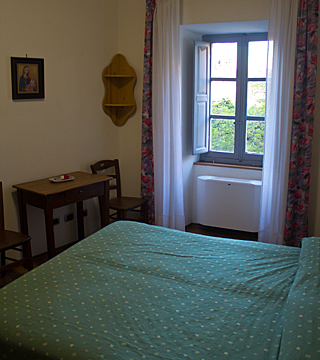 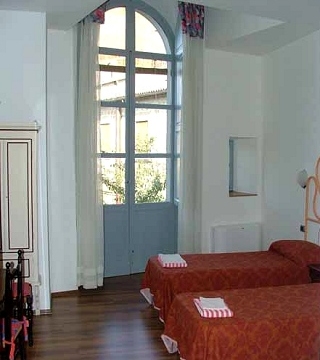