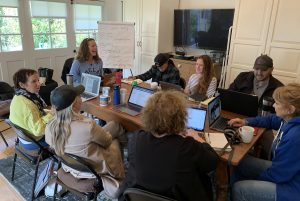 ELVIS: A Peek Behind the Velvet Rhinestone Curtain

I recently watched the lush and lavish spectacle that is Baz Lurhmann’s Elvis. Aside from the beautiful cinematography and killer sound editing, I was struck by how well the overall story functioned. It perfectly demonstrates how the seven-point structure we teach in our workshops creates a solid foundation. These are the seven pillars of your character’s journey that ensure narrative momentum builds at key moments. Let’s take a look.

Spoilers Ahead — although at this point you probably have a basic knowledge of who Elvis is and how he died.

While Elvis himself (played by the striking Austin Butler) is of course the beating heart of the story, my first surprise was the realization that the narrative drive belongs to Colonel Tom Parker, the Svengali who “discovered” Elvis and ruled his career. However, both characters have seven points to their individual story arcs, making for a robust, layered narrative.

The film opens with a framing device of an elder Parker (played by a prosthetic-laden Tom Hanks–what?) on the brink of death, telling us not to blame him for what happened to Elvis… We zip back to the beginning of the story to find that in his Ordinary World, Parker is at heart a carnival barker–a Snow Man, adept at separating rubes from their money. He just needs the right act. 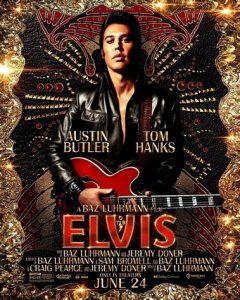 Meanwhile Elvis’ Ordinary World is being a poor young kid with a knack for music and access to Black R&B and spirituals of the time. His Inciting Incident is getting so swept up at a tent revival that the music moves his spirit and he’s hooked. This connection between music and divine will resonate through him throughout the film.

Parker’s Inciting Incident is getting turned onto Elvis’ first single. Something sparks for Parker–this is the act he’s been waiting for. His plan is to find Elvis and get him to sign with him.

Parker’s Point of No Return, the traditional end of Act One, is a seduction on a Ferris wheel, promising to make all the eager young talent’s dreams come true. It is this contract and his financial control of Elvis which will drive the narrative forward. Elvis’ Point of No Return is here as well: I’ll sign on the dotted line and be a star. They both have a plan and are moving forward, inexorably linked.

For a while, as we move into Act Two, everything is great; the money is rolling in. Parker merchandises everything under the sun, even selling “I Hate Elvis” merch to anti fans; he makes money off Elvis coming and going. Everyone wants Elvis, except the decency commissions that find his gyrations amoral. Parker engineers Elvis’ drafting into the Army as a PR cleansing: he’s just a clean-cut American kid! In addition to being a huge music star, Parker keeps his promise to turn him into a movie star. And Elvis meets and falls for Priscilla.

Elvis’ MidPoint Shift, a moment or sequence in the second act where the story is knocked sideways and the stakes escalate, comes as the world changes following MLK’s assassination and his beloved mother’s death. Now ungrounded, Elvis feels the responsibility of his family on his shoulders. Things look grim and he’ll need a new plan to feed the success and stardom he craves.

As things slip into the downward slide of Act Two, Elvis meets some “hippie promoters” who feel he could be a huge international star, but Parker won’t let him tour outside the United States. The first fissure in their relationship shows. Elvis defies Parker to create his “Comeback Special” the way he wants it and Parker, scrambling to keep his promises to the sponsors, realizes he’s losing control of his Golden Goose. Parker engineers a Vegas residency that at first seems ideal. Elvis wants it to be his launch pad for a huge international tour.

Parker’s MidPoint Shift is when the awful truth of his situation comes out: he was never a colonel, a Tom, or a Parker. He has no passport and can’t get one, so he kept Elvis from touring internationally for his own ends. As with all good Midpoint Shifts, this intensifies Parker’s goal and makes it harder for him to accomplish. Given that Elvis is already chafing at their partnership, the revelation comes as a solid gut punch to his plan. Parker will have to work harder now to get what he wants.

Elvis is now sure that the best path forward is to break with Parker and forge ahead with the hippies. Parker has a heart attack, and when Elvis does the decent thing and goes to see him in person to leave their professional relationship, Parker manages to pull him back in, essentially trapping him in Vegas with a multi-year contract. There will be no international tour.

As time passes, Parker controls Elvis and keeps him performing through drug addiction with the help of a quack doctor. He placates Elvis’ international ambitions with a revolutionary satellite concert around the world. He invents security threats that keep Elvis in the United States. Elvis works to exhaustion.

Things get darker as the world continues to change. Sharon Tate is murdered; the IRA is actively bombing in the UK; the Rolling Stones concert riot at Altamont results in fan deaths. Now in his final rhinestone-jumpsuit-and-capes phase, Elvis descends into paranoia, drugs, and women.

Then Priscilla leaves Elvis, and he passes out backstage, marking the Low Point for both characters. The Low Point is often the mirror opposite of the Point of No Return, where characters are furthest from their goal. Here, the starry life Elvis signed up for on that Ferris wheel could literally end because his health is so wrecked. For Parker, it’s the Low Point because he’ll lose everything if he loses the Elvis cash flow. Parker orders Elvis drugged up; on with the show! Elvis melts down on stage and fires Parker publicly.

Now diametrically opposed in Act Three, Elvis’ Final Challenge will be to get away from Parker. Parker’s Final Challenge–the most difficult thing your character faces in the story–will be to stop him. Spoiler: Elvis fails.

Elvis is set to leave when Parker bills Elvis alleged billions and refuses to let him out of his contract. Elvis is trapped. Miserable, he continues to perform as he gains weight and gets more and more unhealthy. At last, he dies. Parker has milked his Golden Goose literally to death.

In the New Ordinary World, we all live with the mark Elvis left on our culture. Parker, who maintains it was not him, but our love for Elvis that killed him, shirks responsibility for it all and spends the subsequent years pouring his fortune into slot machines.

Though both characters have intertwining seven points, Parker’s goals shape the story just a little bit more. In Elvis, Lurhmann poses a tragic question: how could such a singular talent be squeezed dry? Perhaps we did in fact love him to death, as Parker wants us to believe. However, through his storytelling choices, Luhrmann clearly indicts Parker. Because Parker drives the movie, the implication is that Parker bears the ultimate responsibility. All the talent in the world won’t save you from bad management, so be careful who you trust.

If you want to learn how to apply structural tools like the Seven Points to your next script, apply for our next Concept to Pages live online workshop.