LUCA and the Missing Stakes

As lovers of all things Italy, we naturally couldn’t wait to see the new Disney Pixar animated feature, Luca, set in a fictionalized version of Cinque Terre’s Riomaggiore on the Ligurian coast. The film is a sort of updated mash-up of The Little Mermaid and Splash, only in this case romance is replaced by childhood friendships and the sea creatures-turned-humans are two young boy besties who befriend a human girl.

The Plan A is clear from the end of the first act: Luca wants to live where the people are (just like Ariel), his friend Alberto wants a real Vespa, and human Giulia needs to win a sort of mini triathlon competition against the town bully. Luca and Alberto are eager to help and but must avoid getting wet because when water touches any part of their bodies, it instantly turns that part back into its sea creature self. (The film does not explain how they are able to drink anything without giving themselves away.) The townsfolk believe all sea creatures are monsters that must be killed immediately, so the boys will have to be careful if they want to live with humans. 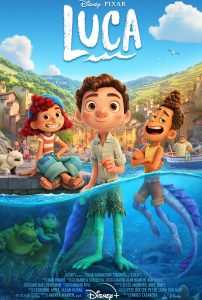 This is all well and good, and the movie’s third act tugs at the heart strings but feels a little hollow. The main issue is that first half of the film drags, and we wondered why. As Luca discovers the human world through Alberto and his swaggering, oddball lost-boy perspective, Luca is fascinated and grows determined to stay on land. This of course means neglecting his home and eventually he’s caught by his angry parents, who fear the wrath of humans. They know the townsfolk want to kill sea monsters! As we go into the second act, Luca, facing banishment to the bottom of the sea with his weirdo uncle Ugo (voiced by a brilliant Sacha Baron Cohen), sneaks away and commits to life with his new buddy Alberto.

Then a series of cute, meandering scenes follows, where the boys play at being human and eventually get up their nerve to check out the human town, where they meet Giulia. Why was this so slow? Why did I not worry about Luca the way I had worried about Ariel when she committed to life on land with Prince Eric in The Little Mermaid?

The answer is stakes. We know Luca’s parents love him and want him back. Sure, he’ll be in trouble, but no big deal. With Ariel, we know her furious father would punish her severely, and we had the added stakes of the sea witch’s dangerous deal: Ariel’s humanity for her voice—the thing that makes her special. The movie throws in a short deadline for good measure—three days.

So what could Luca have done differently? It wouldn’t have been that hard of a fix and I suspect it was considered, because why would you hire Sacha Baron Cohen for just one scene? If Luca’s parents had followed through on their threat and we saw how awful life really was down in Uncle Ugo’s twilight world, we would have had a better sense of the horrible future that awaited Luca.

The Point of No Return at the end of act one should be what its label implies: the protagonist shouldn’t be able to return to how life was before if things don’t go as planned. Bridges are burnt in Ariel’s choice. She can’t just go back. The positive stake is that she’ll win the love of her life and get to be human; the negative stake is that she will be trapped forever in Ursula’s garden of lost souls.

Luca’s positive stake is similar: to get to be human, albeit with less of a specific, focused goal than Ariel. He just wants to play around. Late in the story, Luca develops the goal of going to human school. That layers in some lovely themes about the value of education and sacrifice for loved ones.

However, although there is risk in being around humans, there is little in the way of negative stakes. If Luca goes back, we get the sense his parents will scold him but welcome him with open arms. They spend most of the movie worrying and looking for him, after all. Perhaps if we had seen a few minutes of how awful Uncle Ugo’s home really was, and had there been more of a commitment from his parents that this was Luca’s future, the film might have been sharper and more fun. Also, the early part of the second act (sometimes called the “Fun & Games” section) when the boys play at being human, would have felt less meandering and superfluous, and anchored into the overall story structure more solidly.

“You can’t fix a March problem in August,” my sportscaster friend tells me about baseball coaching. The same thing applies to scripts. You can’t fix a first act problem in the third act. You have to make sure your story has a strong foundation and clear, high stakes at the Point of No Return. If not, you will struggle to deliver resolutions and pay-offs, and we’ll be left with a charming premise that could have been so much more.

To make sure YOUR script has solid story mechanics, consider joining one of our workshops.