You may already know the fundamental ways of increasing momentum and tension in your script: get into scenes late and get out early; craft scenes around your protagonist’s pursuit of a goal; hold onto your central mystery as long as you can; and so on.

Another powerful way to increase the narrative flow of your story operates on a nearly subliminal level: Transitions! Like motifs, transitions are often not part of your initial draft. Nor should you slow down writing your first draft by trying to come up with them. Get those words on paper and worry about elevating them in your next draft. As you do, you can think about polish details like transitions. 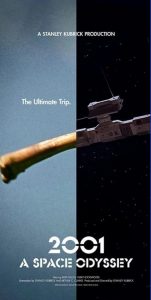 In each case, the writer slides the reader/viewer’s mind along a story that flows like a river, leaving no time for the reader to disengage from the current. Strong transitions keep us right in the moment. They make it feel like the story is moving faster, because our minds never stop to question the end of one scene or how we got into the next.

In television, the show Archer is a masterclass in transitions. It consistently cuts from dialog in one scene that is seemingly answered (in an absurd and unrelated way) by the opening line of the next scene. In film, a famous example is the bone thrown by the ape in 2001: A Space Odyssey, which match-cuts to become a futuristic space satellite in the following scene. Instead of a jarring 4-million-year leap, that cut communicates “evolution.” Where have you seen transitions done well?

In your script, look for colors, visuals, sounds, and situations where you can smoothly transition your scenes from one to the next. Details like these can make the difference in your script being read as an amateur effort or a polished professional piece.