Add Depth to Your Script with Key Details: The Motif

You’re feeling good about your latest script draft. You’ve crafted a strong story structure and compelling character arcs. But there’s something missing that you can’t put your finger on. A little je ne sais quoi.

Threading in a motif–a recurring thematic element–can be the difference between a solid script and a script that stands out.

Consider French Kiss** (as I often do) starring Meg Ryan and Kevin Kline, from the romcom heyday of the 90s. I teach this film in our Concept to Pages class as an example of excellent story structure and character arc, because it’s all there and extremely well developed. But it’s got the details too.

In the film, Kate learns that her picture-perfect fiancé has met the woman of his dreams in Paris, upending her Perfect Life Plan, so she sets out to win him back. Due to a deep-seated fear of flying, Kate hadn’t wanted to go to Paris in the first place. Once there, she refuses to be charmed by the city; its joie de vivre is not her thing. On a more external level, she refuses to be charmed by roguish jewel thief, Luc, who for entirely selfish reasons, agrees to help her in her quest. There is one thing though: she would like to see the Eiffel Tower. 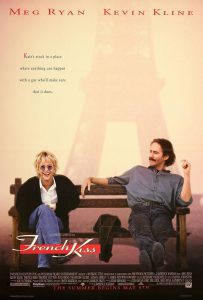 The Tower represents joy, love, and what’s right in front of her but somehow out of reach. Throughout her misadventures with Luc in Paris, she has several near misses seeing the Tower. Once, it disappears between buildings as they drive; once in the wee hours its lights go out just as she turns to look. These are not scenes, just quick beats nestled in larger events on the A storyline. The script would have been perfectly fine without them. But they give it one more layer of depth.

The satisfying payoff to this motif comes near the midpoint when Kate has hopped a train to Nice in pursuit of her fiancé. She’s coming into her own power, no longer being played by Luc, and starting to see the charm in all this French cheese. To underscore this character shift, she finally sees the Tower as the train leaves Paris. She savors the vision, shushing Luc; she’s earned this. It’s a beautiful and wordless moment, and it shows us she’s growing.

Later in the third act, Kate teases Luc with a limp Eiffel Tower novelty toy. It is another small beat in a larger scene that signifies she’s grown into a confident woman, no longer a desperate singleton who would follow a cheating fiancé halfway across the world. And it shows that screenwriter Adam Brooks was having fun writing this.

The Eiffel Tower motif in French Kiss could have easily been left out, but its appearance through the story underscores Kate’s journey and makes the script shine that much brighter.

Other examples of motifs include birds representing freedom in Aladdin and power in The Lord of the Rings, and mirrors in Hitchcock films representing a character’s split personalities. Motifs can also be aural like the bells in It’s a Wonderful Life symbolizing an angel getting their wings, and therefore joy or a goal accomplished.

Consider what motifs might enhance the telling of your story. What could add a visual or sonic through line to your script? You may be able to think of details like these while you’re in your outline phase. For me, motifs are polish that happen in a rewrite.

**It has recently been brought to my attention that this film is not available for streaming in the US which is a crime. All fans of romcoms, Kevin Kline, or Meg Ryan should write a strongly worded letter to Amazon Prime.