The Queen’s Gambit:
The Narrative Power of a Strong Character Arc

As we sat engrossed by the last episode of the marvelous Netflix limited series, The Queen’s Gambit, it hit me that one of the (many) reasons it succeeds is the strong character arc of protagonist Beth. Sure, the solid source material, the stellar acting, the mesmerizing production design, and understated directing help. But for me, from a writing perspective, the show works because of the strong character development.

*I warn you now: spoilers ahead*

Beth is a damaged orphan with an extraordinary talent struggling to find her way in the world. She discovers the bliss of sedatives and the intoxication of chess at the same time. Her loneliness is her armor and the pills her secret weapon as she spends her young life fighting her way up the ranks of the international chess world. Her addictions both fuel and hamper her progress. We know she cannot ultimately succeed in chess or in life as an addict, because that’s how humans work. Beth struggles to free herself from her addictions as they begin to cost her relationships. 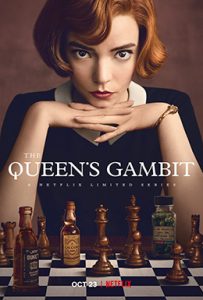 In our classes, we look at each character we’re creating from several psychological points of view. Their “mask” is the way the world sees them, which is often not who they really are. Their “want” is what drives the character forward. Their “need” is often something the character isn’t even aware of, but we, as omnipotent writers, know it’s the thing that will allow the character to complete their journey—a missing piece of their heart. Their “strength” is something they tend to rely upon, but it won’t ultimately be the thing that wins the day for them, because relying on an existing strength doesn’t lead to character growth. Their “Achilles heel” is that unhelpful character trait that trips them up, and their “dark side” is who they might become if they indulge in temptation or give into that Achilles heel. The type of person they most admire, or envy, is who they desperately want to be—and will likely be at the end of the story. The potential to attain their “true self” is inside them, but something blocks it, usually an internal false narrative they have about themselves—a reason they think they’re unlovable, or a failure, or without talent.

Beth’s mask is that she doesn’t need anyone. It takes her nearly the whole series to admit even to herself that she’s desperate for a human connection she can trust. This is her deepest need. Her want is to be the best in the world (and the love she imagines that will bring her). Her strength is clearly her skill at chess, and her Achilles heel—her pill and alcohol addictions. Her dark side is that of a monster addict who scorches the world around her to feed herself. This is how she rationalizes being alone, and believes she is unlovable. She deeply envies those who have a team around them and people who care—family. She doesn’t imagine she’ll ever be that girl.

Strong character development usually maps directly to the story structure. In a three act structure, the first act establishes the character’s strength, weakness, want, and mask, and usually gives an indication of the other traits as well. The end of the first act launches them on their journey and sets the story in motion. In the case of a series, character development maps to the overall story as well as to each episode. Often, the first episode represents the first act of a series story arc. Duly, in the first episode Beth’s mother dies, landing her in an orphanage where she discovers both chess and pills, as well as her ally, Jolene. Her want is clear: she’ll spend the next few episodes pursuing her end-of-act-one goal of becoming a chess master and toying with rivals as she discovers her power. Her upward ascent is aided by her adoption by lonely housewife, Alma.

As Beth’s addiction competes with her conquering of the chess world, the series midpoint complication is the death of her adoptive mother in whom she found not a nurturer so much as a kindred spirit and rudder. Now, as a famous player of whom great things are expected, but also a girl not quite ready for the pressures of adulthood, she begins to slide to the series low point over several episodes. She’s alone again. Has she learned anything?

A character’s dark side and Achilles heel emerge as they move toward the low point that ends act two. Beth’s journey over the series follows this perfectly. Her dark side takes over as she uses and insults former rival-turned-lover, Harry. Initially dazzled by her interest since he knows he’s not the leading man type, he finally has the self-respect to see the truth of their relationship and sets a boundary, breaking his own heart and surprising her.

From there, even more desperate to be loved, she tries with another former rival and champion, the swaggering loner Benny, but he too sees that her heart isn’t truly open, and won’t let himself be dragged into her darkness. She’s now truly alone and adrift, in danger of sabotaging herself to a degree from which there will be no coming back.

Following the low point, a character moves through a “dark night of the soul,” in which they face their worst fears and gather strength for the final challenge of act three. Here they have to set aside their strength, which is often a crutch, and reckon with what they want, laying the groundwork for their true need to be fulfilled in act three. Often a character must let go of what they think they want in order to become their true self.

In Beth’s dark night of the soul, her bestie from the orphanage, Jolene, breaks her walls down by helping her to grieve Mr. Shaibel, the orphanage janitor who taught Beth chess in the first place. He was the first person who believed in Beth and saw something special in her; he saw her as a person worthy of connection. On top of that, Jolene is willing to invest in Beth, because she believes in her too. This admission (on a subconscious level) that connections matter allows her to gear up for her final challenge of act three. As she contemplates facing her biggest rival, the Russian world champion, she realizes she must give up the pills and beat him with her own wit and skill if she is to ever respect herself the way her growing throngs of fans do. She must do more than live for herself; she has people counting on her.

In stories, you often find that if a protagonist lets go of what thought they wanted in order to obtain what they truly need (“letting go of the want to fulfill the need”), they end up with what they wanted too (“the want meets them in the end”). Here Beth flushes the pills she thinks she needs to win at chess and reaches out to Benny to make amends. She’s let go of her addition (“the want”) to attain human connection (“the need”). To her surprise, the guys are all there for her; Benny, Harry, and the rest of the chess world who cheered her rise at the start. Together they form a team that helps her work through strategies, the way she used to depend on the pills to do. She becomes a true champion on her own terms. Finally, she’s the kind of girl with a team in her corner, with the forever family she’s been missing her whole life. And in the end, her innate talent—the one she thought she needed pills to access—comes out all on its own.

The kind of character development in The Queen’s Gambit is what we teach in our Concept to Pages class, where we work with writers to identify the character elements and traits that produce a satisfying character arc that maps to a strong structure. That’s how stories create catharsis. The catharsis in Beth’s improbable journey have her series currently at number one on Netflix and chess board shortages predicted for this holiday season. Who knows, maybe the next Queen’s Gambit will come out of our next class.